What is it that allows some people to live right on the edge, always at risk of falling off, and actually falling off in some cases, and then come right back?

Whatever that thing is, Catherine Lafferty has plenty of it. 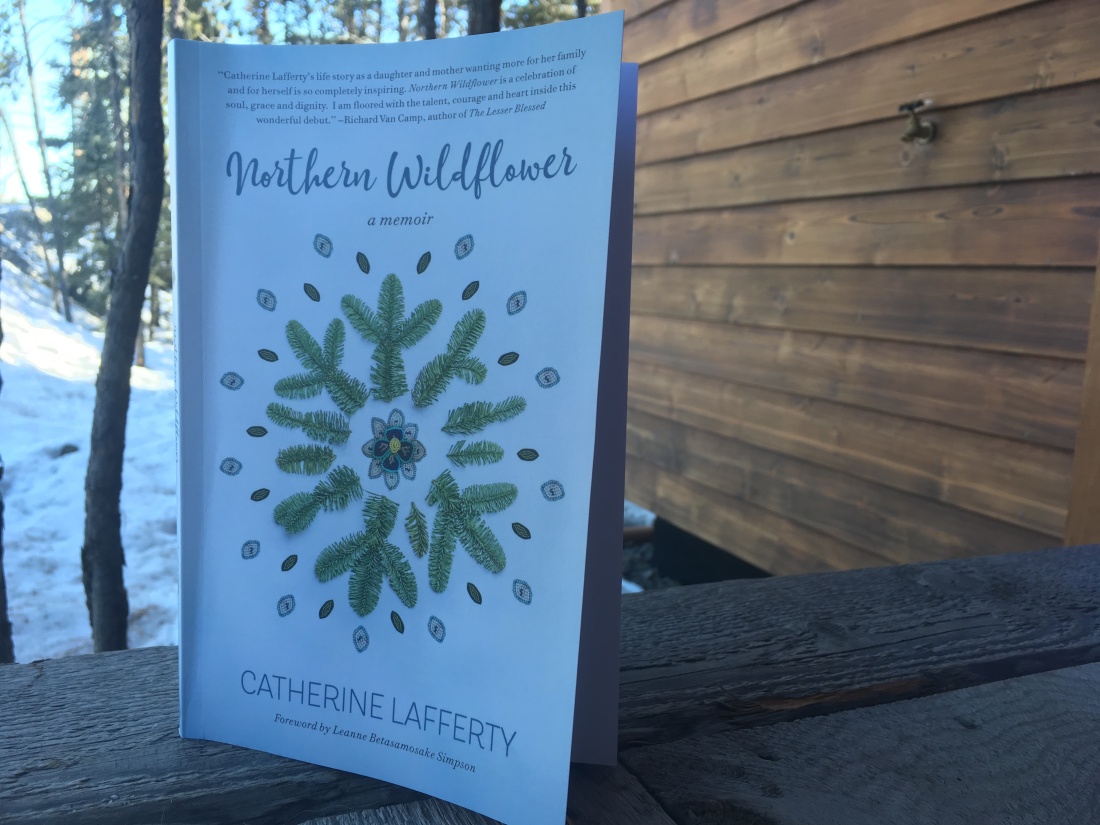 Her memoir, Northern Wildflower, is a chronicle of the many times she looked out at the horizon, saw something better, and then set out on the path to get it, in spite of the many obstacles.

Lafferty was raised mainly in Yellowknife, by her grandmother, and her memoir describes a tumultuous path from wild youth to politically-conscious council member for the Yellowknives Dene First Nation.

It starts in elementary school, when Lafferty is fitted out with a pair of glasses from “the small back section of the eye glass store, the Treaty section. The section that no one wanted because they were cheap, plastic, unfashionable glasses. I hated wearing glasses and, every time I got mad, I would throw my glasses on the ground and stomp on them in a rebellious refusal of both the system that bound me to a certain class and the fact that I had bad eyes. But my anger was of no use to me, because my glasses would be replaced two weeks later by another cheap, oversized frame at no cost.”

This is a perfect description of growing up a second-class citizen, and knowing it. Perhaps that anger is a source of Lafferty’s tremendous drive and energy.

The rebellion continues into her teenage years, when Lafferty really goes off the rails, dropping acid, trying cocaine and partying hard, but still chasing her dreams. At one point, aged fourteen, she buys a bus ticket and travels for four days to follow a boyfriend who’d moved home to Vancouver Island. Arriving on the doorstep with $10 to her name, the truth of her situation hits her. “A homesick feeling sunk in the moment I met Matthew’s mother. She was not fond of me, and it was glaringly obvious.”

[The writer in me adds: Lafferty should really make a film about this journey. The hopefulness, the ambition! Then the total destruction of her hopes and the bittersweet homecoming to grandma. What a story!]

Lafferty’s fearlessness draws her into some bad situations. “I don’t know how it happened or when, but I became entangled in a prostitution ring,” she writes, giving few details other than to say that it was “happening in the middle of town in a well-known bar, in broad daylight.” She describes watching a grown man shoot up drugs, and how horrified she is at the power this little powder seems to have over him. Fortunately, this shakes her out of any desire to try it herself.

After an exhausting adolescence, Lafferty starts to focus on the future, enrolling in beauty school, which means upping stakes, now with children in tow, and starting all over again in Edmonton. She’ll do this again later for a course in social work, and again when she becomes a student of Justice at the University of Victoria.

There’s a lot more in this book: men, both the good and bad kind; a child’s terrifying illness; the fascinating details of her Papa (grandpa) who lives in an apartment three floors directly below  her grandma but takes her (the grandma) on coffee dates; and the horrifying story of a man she meets in Victoria who she wants to move in with, but who has other, and quite despicable, ideas.

Throughout all this is a persistent backdrop, which Lafferty identifies in typically generous fashion: “There is a lot of work to be done to ensure that Indigenous people in this country are treated with respect and dignity.”

No kidding. After Lafferty punches her music teacher in high school, someone calls the police, who come to her house and knee her in the back to subdue and arrest her. She spends a “couple of days” in a jail cell before she’s finally taken to court, only to find her class is on a field trip to the courthouse. “One by one, my peers opened the small window of my cell door and got a perfect view of the mess that was me.”

It would be a stretch to say that Lafferty shrugs this off, but one thing is for sure: whatever doesn’t kill her seems to make her stronger.

There is one big flaw in this book. It starts on page one with her birth (or conception; this isn’t clear) and then goes into five pages of politics. Lafferty has strong views on Indigenous rights and an Indigenous resurgence, but these views will not be news to anyone who picks up this book, and this section would have been better left to the end. Also, the book is chronological, which means it starts at the beginning, instead of the interesting parts.

But whatever you do, don’t put this book down. I read it in one sitting and was fully captivated.

It’s a brave thing to write a memoir, especially when you’re still in your thirties, and you live in a small town (Yellowknife) surrounded by friends and family who already know too much about you.

But Lafferty did it, with no apologies. Instead, she writes, “I take risks and go after my aspirations, and that’s what makes all the difference.”

Catherine Lafferty will be a guest author at the 2019 NorthWords NWT literary festival in Yellowknife May 30 to June 2.

Got a Northbook you’d like to review? We welcome guest posts, especially rebuttals. saraminogue @ gmail.com.

Originally a farm kid from Saskatchewan, I moved north to Iqaluit in 2004, then west to Yellowknife in 2013. I've been reading about the North ever since. View all posts by saraminogue