Trapping was indeed the life for John Tetso, who writes vividly about the outdoors in this 1970 book. “The wind flowing on the face and the smell of campfire smoke are two temptations I can’t resist … and the good solid feeling that you are your own boss.” 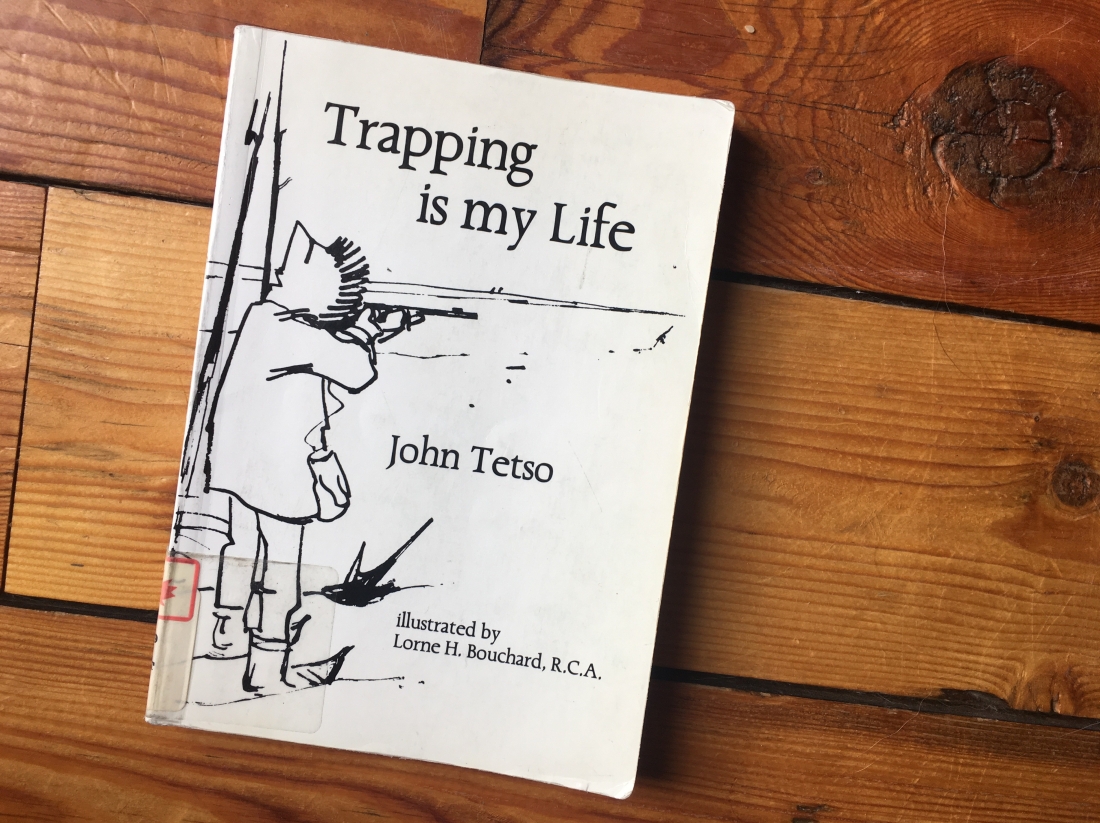 Apart from the fact the Fort Simpson library is named for him, I find scant information about Tetso online. Here’s how the book’s Toronto publishers describe him on the back cover:

“John Tetso was a Slavey Indian trapper who lived and worked near Fort Simpson, where the Liard meets the Mackenzie. Conscientious, industrious and perceptive, John Tetso cherished his independence. He regretted that many of his people drifted into the settlements. For him, the harsh but rewarding life of the wilderness was better.”

The book was published with the help of Susan Molson, a member of the millionaire Molson (as in the beer) family, who met Tetso and his family during a trip down the Mackenzie River in 1962. “We joined them at their fire and talked of many things,” she says in her introduction. A correspondence ensued that lasted several years and gave Tetso the excuse to produce several neat sketches of his life.

Tetso once killed a bear with an axe to the head (having come upon him believing him to be dead). He gives straightforward instructions on hunting beaver, setting marten traps and how to catch animals that sink to the bottom of lakes.

Other subjects: his fierce competition with wolves, the cold of January, instructions for making snowshoes (birchwood and steam) and instructions for making a violin (bit more complicated). He recalls choking up listening to Bing Crosby on the radio in the bush, and remembers the time he carried his sick uncle to town in the back of his dogsled, only to have him die shortly afterwards.

Tetso had access to a large range of knowledge. Here he is tapping ice with the back of an axe to find out where the beavers are. “The trained human ear can be something like the electronic flaw-detector used in the steel industry.”

His chapter on “Entertainment on the Trapline” includes him coming across a mining camp and being invited one evening to watch Breakfast at Tiffany’s. “I nearly split my sides with laughter … and that made me forget my beaver traps too.”

He writes conscious of his audience, which he assumes (correctly) is hungry for the simple life he enjoys. Here’s how he describes a dinner of beaver tail and liver after a poor day’s trapping. “To me, it was something far better than those hundred-dollar plates you hear about in a big political convention. I have never tasted those plates, and I guess I never will, but I think my little meal had them pretty well beaten that day. Why, I did not even cook it according to the recipe of the cookbook. But I am not a very rich man and can’t afford one anyway.”

Tetso is also conscious of the legacy of his own life. The recollections in his book seem to have been written over several years in the early 60s, when Tetso is in his forties. Within that time, he makes plans to buy a “power toboggan” (i.e. snowmobile) and watches many friends settle full time into new government houses in Fort Simpson, giving up on life in the bush.

“Well it’s fun recalling these past experiences for you. I do this because I hope some of you, especially the younger generation, will learn something from my own experiences. Reading is the best form of absorbing information, you know!”

The book ends abruptly, when John’s son Ernest writes the Molsons to inform them of John’s death by pneumonia.

To quote the back cover again, this time from a blurb attributed to something called The Amerindian, “The book provides a rare insight into the mind of a sensitive man who lived and understood two worlds.”

Originally a farm kid from Saskatchewan, I moved north to Iqaluit in 2004, then west to Yellowknife in 2013. I've been reading about the North ever since. View all posts by saraminogue